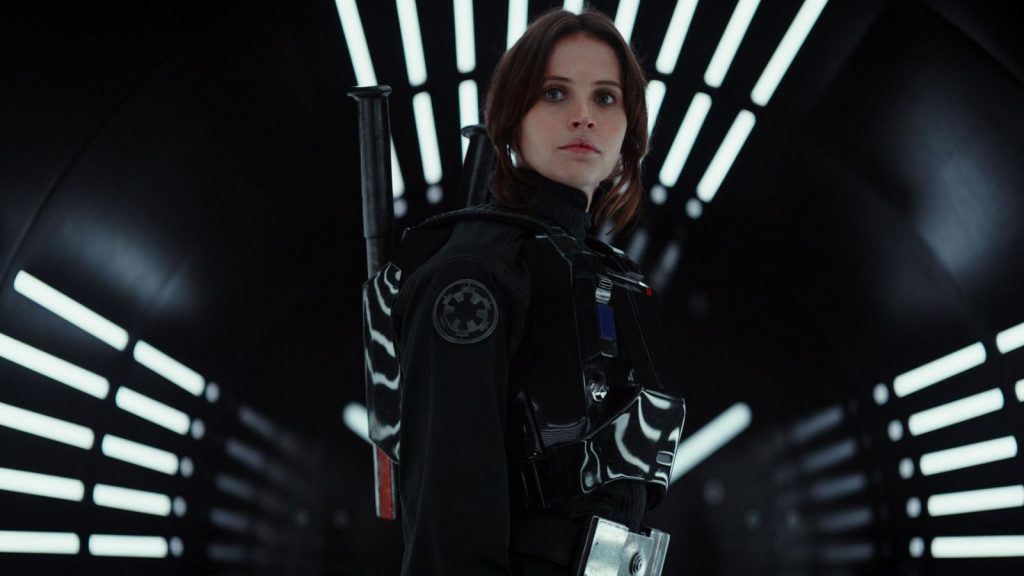 If you had told Gareth Edwards, the director for ROGUE ONE: A STAR WARS STORY that he was going to direct a STAR WARS film when he was a young boy idolizing the series he would have been a “nervous wreck, and not do any homework or schoolwork, and I probably would never have had a job, and I would have sat and prepared it for 30 odd years.”

Edwards is happy he didn’t know he would one day be a STAR WARS director,

…then the day [filming] began, I think I would have brought in everything saying,  “Okay, I know exactly what to do. It starts off with this shot, and then becomes this shot.” Then I would have wasted my entire life. There’s something about the organic process of making a film, and working with others that if you don’t let it in…you limit how great the film can become.

ROGUE ONE: A STAR WARS STORY is the first film that is not part of the original STAR WARS saga. It’s a film about STAR WARS and fits well into the story but it is not part of George Lucas’s original nine films. Taking on a film of this caliber with a fan base and following like STAR WARS is a huge undertaking which is not lost on Edwards. A friend of mine, a huge STAR WARS fan, Kurt Gustafson wanted me to ask Edwards this question: How difficult, or intimidating, was it to tackle a property like Star Wars knowing the rabid fan base will scrutinize every word and action? How did you overcome that?

Edwards chuckled and readjusted himself in his chair; consequently, my heart started to beat inside my chest. I’m still the newbie on these press trips and while I love asking questions during these interviews I’m always a little self-conscious that it will be the wrong question. Thankfully, Edwards wasn’t offended and he answered my question in the most poetic way,

There’s a line in the original [STAR WARS: A NEW HOPE] I grew up watching every day.  And it is definitely the reason I got into filmmaking. Luke is doing the attack run on the Death Star through the trench. He’s got the computer and he turns it off. Someone goes, “Luke! You’ve turned off your computer!” Luke says, “It’s okay, I’m all right.” He trusts the force.

Literally you [have] got [to] turn off your computer…and not look at the internet. Believe you can bulls eye this. You’ve just got to keep going! Everyone’s shooting at you. Believe in yourself, and then go for it.  The takeaway from the original film [for me] was if you believe you can do something, and you never give up, then you can achieve anything. I guess I took it too literally. I want to make Star Wars films. It applies to everybody.

Are there any cameos in the film that Edwards could tell us about? In fact, there is and it’s him! He can’t tell us the details otherwise it would spoil things but it was a lifelong dream of his that’s finally been fulfilled. Edwards said, “I get a cameo, and I can’t tell you what it is because it will spoil things, it was a dream come true.”

The story of ROGUE ONE is how the Rebels obtained the plans for the Death Star. Without this story, there wouldn’t be a STAR WARS: A NEW HOPE film. Edwards said,

It’s feels like probably what the characters feel like in that it was an impossible mission really. It was like something you’re not supposed to succeed at, or survive.  Trying to make…something that lives up to those masterpieces I grew up with is nearly impossible. We became, like, a band of rebels making the film and we were rebellious! We did things we weren’t supposed to do. There’s a set way of making these big movies. Say the shoot was 10 hours long, or something, one day…and so we’d get what we needed for the scene…last hour [is] like, “Okay, do whatever you want. So we would just play around.

A lot of the stuff that was in the trailer came from things like that. There’s a picture of Krennic in the white cape, and he’s sort of [standing] looking with the big blue sphere behind him.

Felicity going in and the tunnel lights up round her, as she turns around. Okay, we’re getting her to do the next scene, and she walks into the tunnel, and as she walks into the tunnel, someone just turned the lights on. I saw the lights are going around her, and I was, like, “Oh my god!  That looks really good!” And I was like, “Stop, stop, stop!” Everyone goes, “What?” I said, “Hang on, we have to film this.”  And [everyone was like, “No! [We have] got to move on.” I said, “No, no! We have to film this. Felicity, do that again, but just look round as you do it.”  I promised everyone it would take, like, a minute.  And so we start rolling.  And obviously you’re like, okay, one more take.  Okay, one more take…anhour later, it’s like, “Okay, I think we got it.” And everyone’s like, “Well, where’s it gonna be in the film?”  And you think, oh, I don’t know!  It just looked good. Then the trailers come in, and Disney shows you this is what they were thinking for the trailer.  And these shots start turning up. You go, “Oh, cool!  See? I did that.”

The dedication and attention to detail that Edwards put into ROGUE ONE really made the film a perfect fit in the STAR WARS story. I was privileged to see the film on Monday, December 12th at an advanced press screening. I’ve been thinking about the film since Monday. I actually decided that I couldn’t write a good review without giving away major spoilers because the way the film affected me has to do with the spoilers. It’s good, like EMPIRE STRIKES BACK good. I imagine that the way I felt leaving the theater is how the original theater-going crowd felt. ROGUE ONE perfectly ties into the saga and makes STAR WARS: A NEW HOPE heroic. There’s another level of understanding that we have watching A NEW HOPE now that we’ve seen how the Death Star’s plans came into the hands of the Rebels. I would definitely see the film again.