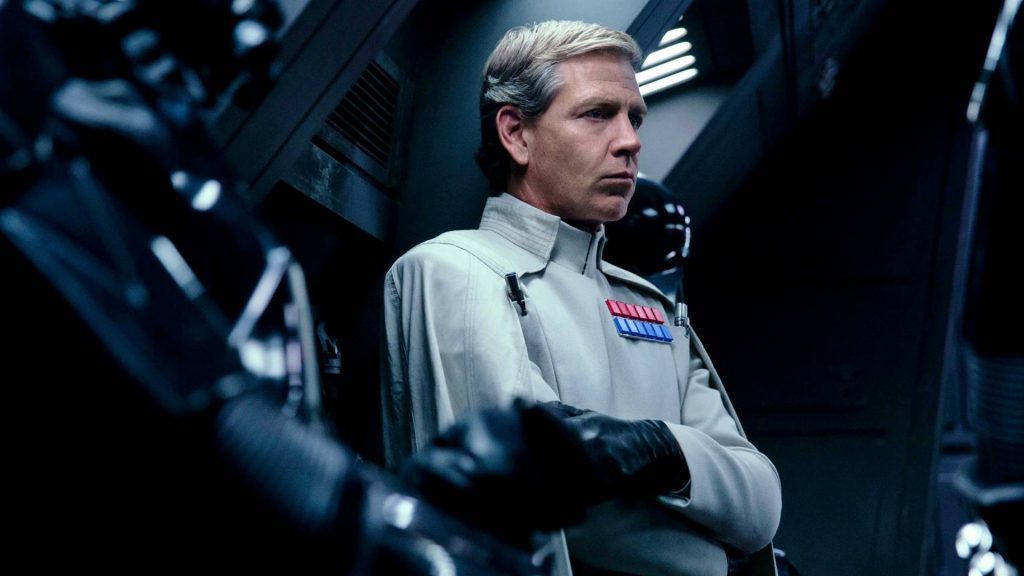 He plays a villain in ROGUE ONE but a few minutes into our interview with Ben Mendelsohn and I was smitten. The actor, who recently won an Emmy for his supporting role in the Netflix series Bloodline, is known for playing villains and characters who are borderline sociopathic personalities but in real life he is completely charming. And he has this way of talking out of one side of his mouth that’s just adorable….and yet he plays this horrendous character, Director Orson Krennic, the man who is hell-bent on making the Death Star. Krennic will literally go to any length to prove reach his goal and please those in higher positions.

Mendelsohn, who has been a STAR WARS fan from a young age, told us about his character, Krennic, “He is the director of military intelligence and operations. And for the purposes of our film it means he’s the dude that built the Death Star and is bringing it to its final brilliance.”

One of the other bloggers asked him since he was a fan of the original films if he had ever thought about being on the empire side of things. Mendelsohn kind of chuckled and then readjusted himself in his chair,

No. No, I mean but that’s the folly of youth isn’t it? No one imagines that they’re going to end up on the side of the empire. But you get older. You know you come to realize the peace and stability in the galaxy is worth fighting for and that all these airy, fairy ideals of the rebellion are very well and good but what happens when they get into power?

When you see the film, it does not take long to develop a hatred for Krennic and Mendelsohn plays it so well. The first scene Mendelsohn is in is incredibly dramatic.

The trailer above only shows a snippet of what I’m talking about but basically, Krennic is looking for Galen Erso, an engineer who started work on the Death Star. Krennic needs his help to finish the project and Erso and his family are hiding on a remote planet. We asked him about that scene, and if you do not want any spoilers at all stop reading right now (although this really isn’t going to spoil anything about the film in my opinion but I know sometimes people don’t want to see anything about a movie beforehand)… Don’t read the paragraph after this photo:

Mendelsohn described that first scene to us,

I mean you put that costume on and you’ve got those boots on and you have that cape. {At this point Mendelsohn was standing up next to the interview table.} And all of a sudden you just feel that power. And basically the thing about those guys, the thing you saw last night [when the press saw 20 minutes of the film] is that from [Krennic’s] perspective they’re [Jyn and her mother, Lyra] just in the way. And I mean, I’m sorry but she came out with a gun ready to shoot me. I mean, what are [Galen and Lyra] thinking? …that was a very, very good set up I thought. I thought that that set up told us a lot about what we were doing in this film.

I have to say, the first time I saw [the line], I remember going, “Oh that’s so wrong; ‘Find it.’” I hated him [Krennic] at that moment too. That’s a really clever set up I think.