This is the third post in the Busy Mom’s Guide to the Gilmore Girls blog series, if you haven’t read part one or part two,… 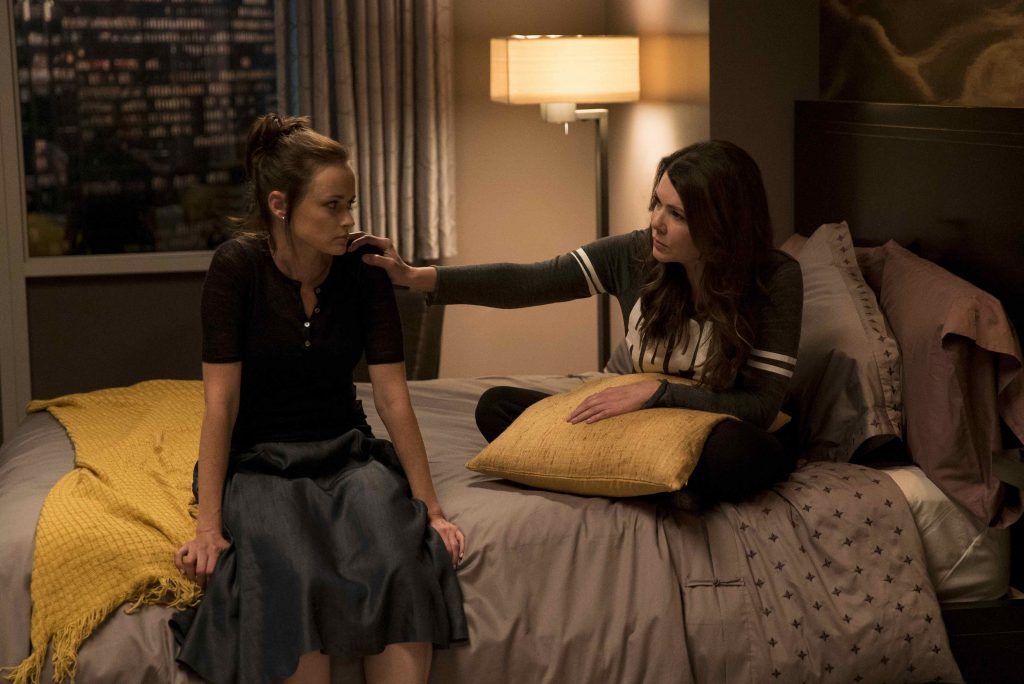 This is the third post in the Busy Mom’s Guide to the Gilmore Girls blog series, if you haven’t read part one or part two, head on over and read all about seasons one,two, three and four. Clearly, I really liked Season 5 as I could not fit in both Season 5 & Season 6 in one post otherwise it would be one gigantic post and who has time for that? (Hello run-on sentence!) Netflix’s Gilmore Girls: A Year in the Life is airing exclusively on Netflix on Friday, November 25th, but you’re a busy mom and you didn’t watch Gilmore Girls when it originally aired; what’s a girl to do? The answer is simple: Read our guide and you’ll fly through all seven seasons by November 25th.

The Busy Mom’s Guide to the Gilmore Girls – The must-see episodes from Season 5; watch now so you’re ready for Gilmore Girls: A Year in the Life coming to Netflix on Thanksgiving Day.

“Say Goodbye to Daisy Miller”, 5.01: Like usual, I’m going to suggest that you at least watch the season premiere and finale. In the season five premiere, Rory has to deal with the consequences of her mother finding out that not only did she lose her virginity to ex-beau, Dean, BUT, Dean also happens to be married. Not Rory’s finest moment by any means and I really appreciated that Lorelai held Rory accountable but also showed her unconditional love. Luke finds out that Lorelai actually does want to pursue their romantic relationship and Emily leaves for Paris to find herself after separating from Richard.

“Written in the Stars”, 5.03 – Luke and Lorelai’s first official date and in typical Lorelai fashion, she wants to head into it nice and steady without letting all of Stars Hollow in on their secret. All plans fail, however, the next morning. This episode is also really important because, while Dean and Rory are trying to make things work (even though Dean’s kind of turned into this jerk), Rory meets Logan Huntzberger. Oh and Paris’ boyfriend and professor, Asher Fleming, passes away.

“You Jump, I Jump, Jack”, 5.07 – With Logan’s help, Rory gets the inside scoop on a secret society Logan is a member of at Yale for a feature story she pitched at the school’s newspaper. Logan and his friends whisk Rory away for the society’s (aptly named “The Life and Death Brigade”) weekend away in the woods where Logan continues to push Rory to go out of her own comfort zone. Emily and Richard find out about Luke and Lorelai so Emily invites Lorelai and Luke over for dinner (remember, she and Richard are still separated). Emily passive aggressively makes it clear to Luke that he is not good enough for her daughter. Richard, not wanting to miss out on being able to get to know Lorelai’s old friend and new suitor, invites Luke to go golfing. Against Lorelai’s warning Luke accepts the invitation which is met again with passive aggressive comments and snide remarks from the Gilmore patriarch. Really, this episode for me, is the one that I remember when I think about Gilmore Girls. The setting in the woods is beautiful as are the costumes. 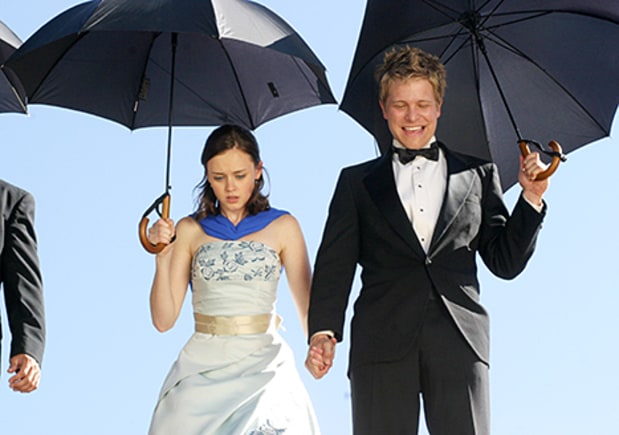 “Wedding Bell Blues“, 5.13 – Okay here’s a little backstory because you’ve missed a lot in the Christopher-Luke-Lorelai love triangle. Ideally, you’d be able to watch the episodes that precede this one but you’re a busy mom so I’m just going to tell you what’s happened thus far. Christopher is left by his baby-mama and wife Sherry, who runs away to Paris. Christopher begins to contact Lorelai but is met with disdain from Rory who doesn’t want Christopher to ruin the new relationship budding between her mom and Luke. There’s major tension now between Christopher and Rory. Oh yeah, Richard and Emily are back together and the wedding that’s in this episode refers to their vow renewal. Logan shows up at the wedding with another girl and that really makes Rory jealous. It’s safe to say that if you’re a Rory and Logan fan you’ll like this episode.

“So…Good Talk”, 5.16 – Luke and Lorelai are split at this point and both are completely miserable. Their split is influenced by Emily Gilmore’s interference and judgemental attitude towards Luke at the vow renewal. In this episode, Rory attends Friday night dinner with her grandparents and Lorelai does not attend. She’s too broken and hurt to have anything to do with her parents, in particular, her own mother. Rory lashes out at her grandmother, Emily, for interfering in Lorelai’s love life and ruining her relationship with Luke. Meanwhile, Luke is completely lost and miserable without Lorelai and it starts showing up at work. A pivotal moment happens in this episode between Luke and Emily, yes, you read that right.

“A House Is Not A Home”, 5.22 – Rory’s met Logan’s parents and grandfather at this point; they’re disapproving of Rory Gilmore (shocking, I know, since she’s the bee’s knees). Although, Mitchum Huntzberger, Logan’s dad, is kind to Rory and offers her an internship at one of his newspapers (he’s a major player in the newspaper industry) he tells her in the episode prior to this one that he doesn’t think she has what it takes to make it in the biz. Rory’s not used to people doubting her and this shakes her to her core. What’s a girl to do? Why steal a yacht! Yes, Rory, not Logan, decides to steal a yacht. She’s caught red-handed and Lorelai has to bail her out of jail. Keep in mind we’re starting to see Rory, the hard working academic apple of the Gilmores’ eyes, unwind here and it’s probably one of the reasons why I like season five the best. Rory’s next big decision is to drop out of Yale (*gasp*). Yes, drop out; everyone sing it with me: “Ivy League drop-out, go back to state school…” No? Okay, just my little nod to Grease. In an act of desperation, because those always turn out to yield awesome results, Lorelai pleads with her parents to knock some sense into Rory. Again, an act of desperation does not yield positive results…definitely, watch this finale. Plus, our favs Luke & Lorelai continue to make us go, “Awe! That’s so sweet!” 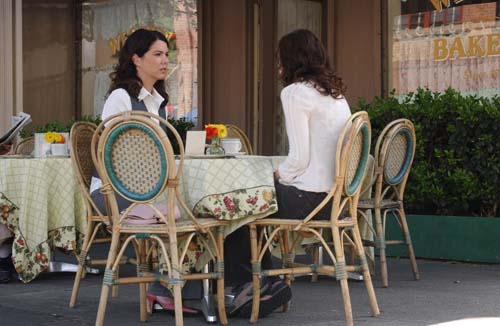 I didn’t realize how much I adored Season 5 until I started writing this recap. There would be just one more season that the creator of Gilmore Girls Amy Sherman-Palladino, and her writer-director husband, Daniel Palladino, would work on. After the original network that housed Gilmore Girls, the WB, joined forces with UPN to create the network, The CW, the Palladinos left citing that they were unable to agree on a contract. There’s a really interesting interview EW did the brilliant husband-wife team on the real reason they left.