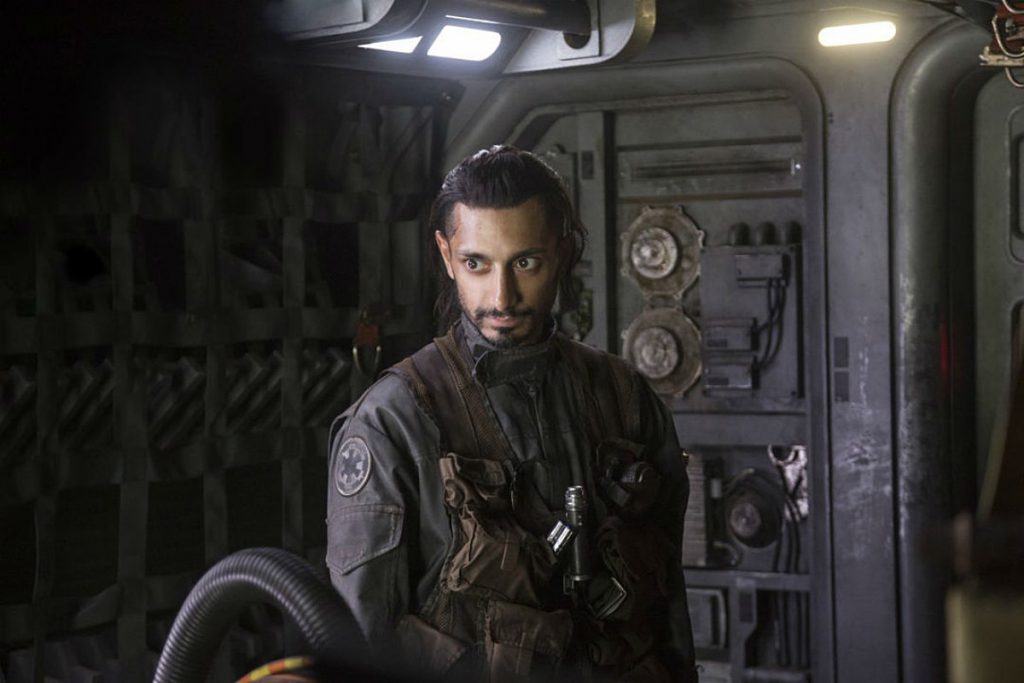 Riz Ahmed has had quite the year. Not only is he starring in ROGUE ONE as “Bodhi Rook” but he’s also been nominated for a Golden Globe for his starring role in the HBO mini-series The Night Of. I had a chance to sit down with Ahmed when I attended the press event for ROGUE ONE: A STAR WARS STORY and while he didn’t perform for us the way he did on The Tonight Show with Jimmy Fallon, we found that this Oxford graduate was quite deep and thoughtful. This is one talented Brit!

We asked him to tell us about his character in the newest STAR WARS film,

…he actually works in the Empire.  He’s a cargo pilot.  And he’s from this planet called Jedha, which is occupied by the Empire.  He’s just trying to earn a living [and] the only show in town, really, is working for the Empire.  So he’s a cargo pilot.  But the name Bodhi means “awakening”. He goes through a kind of [an] awakening, and realizes that that’s not the way. He’s got to try and stand up for what he believes in to make a difference.  So he takes a big risk and he defects from the Empire to try and help the rebels.

Working on a STAR WARS film like ROGUE ONE was a “joyous” occasion for Ahmed. He told us that it’s a good thing to love your job and he definitely loved filming ROGUE ONE, however, he also likes to prepare for his roles. He called himself a “preparation freak” and described to us how he visited high schools in the Bronx as well as Rykers Island to prepare for his role in The Night Of, he wasn’t able to prepare for the role of Bodhi Rook, there were no Empire cargo pilots for him to interview,

I realized that the reference point is the world that is around you. When you turn up on set and they’ve built these mountains and space ships, and there’s alien creatures walking past you…The preparation doesn’t have to be in your head.  It’s right there in front of you.  And you just have to soak it up.  So that was… quite a big exercise in letting go when I can be a bit of a preparation freak.

Many of the actors that are part of the ensemble of the Rogue One team talked about the close relationships they built with each other during filming. Ahmed echoed those sentiments when he chatted with us,

We ended up spending a lot of time together because it’s quite an ensemble film and story.  So it’s really about this kind of gang, you know…We’re like this little troop…We spent a lot of time together closed off in sweaty space ships. We got to kind of keep each other alive and awake and we just would crack a lot of jokes, you know? We definitely had to make each other laugh and keep each other’s energy up. So it meant we bonded, for sure.

One aspect of Ahmed’s character I was particularly interested in was the fact that he was a pilot for the Empire and yet in the trailers that I had seen Bodhi Rook seems to be the one who names the team of rebels, “Rogue One”. I asked him about what the experience was like,

It was the last day of shooting. in the reshoots…the very, very, very last day of shooting. That wasn’t one of the lines that was scheduled for the day or anything. I think John Swords, one of the producers said, “Oh yeah!  Um, can you do a take when you, when you say this?” So it was just a very last minute thing they threw in. It wasn’t like I got to read the script and I [thought], “Yes!  I get to name the team!”

And, you know, it’s really interesting, a lot of the film is kinda took shape like that. It evolved.  You know? [Originally] my character started out as a totally different character with a different name, with a different job, with a different relationship to the other characters, [even] comes into the story a different time, and by the end, it was just a totally different guy. And I think that’s kind of cool, you know?  When you do these big movies, a lot of people think that it’s maybe quite stiff and everything has to be planned out beforehand.  Actually, [this was] kind of the opposite. [At] least with these guys…they’re willing to move around as much as they have to to make things work.

You can see Golden Globe nominated actor Riz Ahmed and the rest of the ensemble cast tomorrow in ROGUE ONE: A STAR WARS STORY!