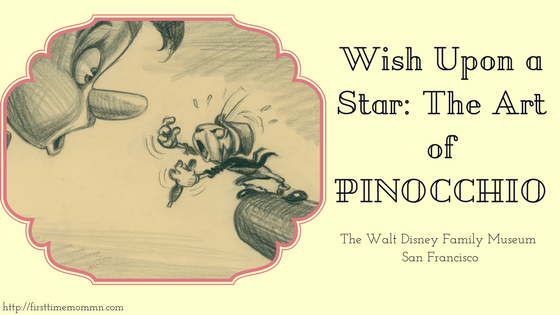 When I was in San Francisco last month for the ROGUE ONE press junket I had the privilege of visiting the Walt Disney Family Museum to look through their special exhibit WISH UPON A STAR: THE ART OF PINOCCHIO. I’ve confessed to you all that PINOCCHIO was not a favorite Disney movie of mine as a child; the scenes where the children turn into donkeys scared the living daylights out of me. My fear of donkey children influenced my lack of interest in PINOCCHIO but my sister has loved the movie since she was a little girl, and she often introduced herself as Pinocchio when she was three-years-old. I know have a newfound appreciation for PINOCCHIO and how brilliant the film was for its time.

I think all too often we take for granted how advanced Disney’s animation was for its time. We watch the classic movies, SNOW WHITE, PINOCCHIO, FANTASIA, DUMBO and BAMBI, those first five animated films and because they’re classics we forget how cutting edge they were at the time. PINOCCHIO, for example, was the first animated film to use Multiplane Camera, a state-of-the-art technology that brought future animated films to life.

While I wasn’t allowed to photograph the exhibit, I was able to grab a few fun photos along the way outside of the exhibit.

Guest-curated by John Canemaker—an Academy Award®, Emmy Award, and Peabody Award-winning independent animator, animation historian, teacher, and author—this immersive exhibition invites the visitor to experience the production processes of the pre-digital era, providing a glimpse into how legendary animators worked and thought. In addition to examining the phases of production, the exhibition reveals how this innovative classic built on the success of Snow White and the Seven Dwarfs (1937) to create a cinema masterpiece of unsurpassed quality. Pinocchio inspired advances in character development and three dimensional design, and the exhibition allows guests to enjoy the art created by the animators and designers of The Walt Disney Studios to create the stunning work featured in the film.

After walking the exhibit I have a true appreciation for PINOCCHIO. The exhibit ran from May 18th, 2016 through January 9th, 2017 and while the exhibit is no longer at the museum I cannot emphasize enough how much The Walt Disney Family Museum has to be on your must-see list while visiting San Francisco.

From the mid-1930s to the mid-1940s, The Walt Disney Studios created five cinematic classics that explored new possibilities and redefined the art of animation: Snow White and the Seven Dwarfs (1937), Pinocchio (1940), Fantasia (1940), Dumbo (1941), and Bambi (1942). Produced at the end of the Depression in the late-1930s, Pinocchio brilliantly deployed state-of-the-art hand-crafted drawings and various technical breakthroughs—such as the Multiplane Camera—to tell an epic story. Touted by many as the crowning achievement of the extraordinary Golden Age of Walt Disney’s early studio, this groundbreaking film pioneered cutting-edge animation Wish Upon a Star: The Art of Pinocchio and sound technologies and firmly established a blueprint for Disney filmmaking that remains intact today. It became the first animated feature film to win a competitive Academy Award®—in fact it won two—and is now considered one of the finest films ever made.

PINOCCHIO is available today (January 10th) on Digital HD and on Blu-Ray on January 31st. If you don’t currently own a copy this is a must for your Disney family movie night tradition!