Guess what…On Walt Disney’s actual birthday, December 5th, I had the chance to screen an episode of the newest Mickey… 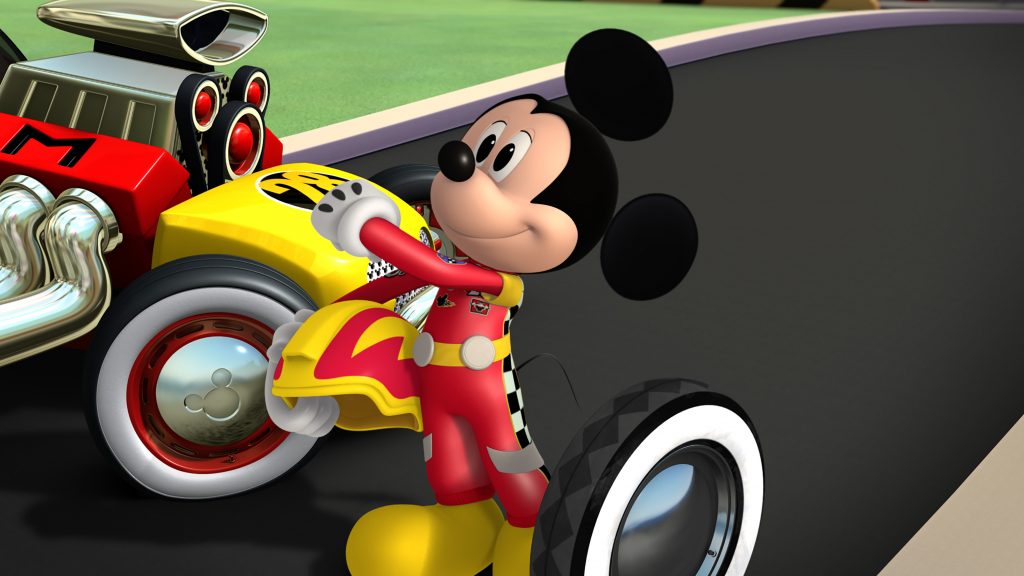 Guess what…On Walt Disney’s actual birthday, December 5th, I had the chance to screen an episode of the newest Mickey Mouse show MICKEY & THE ROADSTER RACERS. I was also able to meet the creators of the new racing show, Mark Seidenberg (co-executive producer and story editor) and Rob Laduca (executive producer), who have just a few popular animated shows under their belt already, GUMMI BEARS, FLUPPY DOGS, WUZZLES, MUPPET BABIES (I just about died when I learned that they worked on MUPPET BABIES), as well as the current very popular show MICKEY MOUSE CLUBHOUSE. I’m pretty certain that MICKEY & THE ROADSTER RACERS will soon become a childhood favorite for today’s kids.

Why have another Mickey Mouse show when MICKEY MOUSE CLUBHOUSE is already such a hit with parents and kids? “What we tried to do on that show was bringing life back to the characters Mickey, Donald, Goofy, Minnie, and Daisy; and making them lots of fun” Laduca and Steinberg explained, “Clubhouse dealt with mathematics and we wanted to make [CLUBHOUSE] more than just Mickey talking to the kids like a teacher. We started creating musical numbers and we made sure that Goofy was goofy! So the kids were being entertained, but they were also being educated at the same time.” So when Disney Junior approached the duo about creating a new show, they thought back to the most popular episode of MICKEY MOUSE CLUBHOUSE. Maybe you remember this one, I know I do, it was “Road Rally” found in season three, episode nine of the series.

MICKEY & ROADSTER RACERS features every main character from MICKEY MOUSE CLUBHOUSE: Mickey, Minnie, Donald, Daisy, and Goofy. They work together as a team and each has their own special car that fits with their personality. The show is kind of like a step up from CLUBHOUSE and introduces some older themes such as teamwork, friendship, etc. It doesn’t emphasize an educational curriculum they way CLUBHOUSE does. Laduca and Steinberg describe,

Mickey [has] a classic hotrod. It’s his normal car from Clubhouse, and then it turns into this classic AmericanRoadster.  A Hotrod easily made from a Model T. Goofy’s personality, being so goofy, if his car could transform, what would it transform into? A bathtub. Minnie being elegant, and into fashion, we went with [this] kind of a bow car, but basically the design comes from a French car called a Delahaye that had very smooth curves, and looked kinda like a bow. Daisy…Well, Daisy loves flowers, so we wanted to turn her car into a smoking dragster [like a] snap dragon. Donald, he’s a sailor, so we created the cabin cruiser and his is the only roadster at this point that can go on land, and in the water which is very cool…

While I was in San Francisco I had the opportunity to screen the first episode and let me tell you it is so fun! There’s a competitive theme to the show that teaches kids about good sportsmanship and working together as a team. There’s also an element of good work ethic that you’ll see as Daisy and Minnie work together to solve a problem. I also totally fangirled Laduca and Steinberg because I loved and I mean loved, MUPPET BABIES when I was a child. Thankfully, they were not weirded out by my moment.

I have an exclusive never-before-seen, behind-the-scenes featurette for you to watch with your kiddos. My kids are chomping at the bit for Sunday to be here so they can finally watch MICKEY AND THE ROADSTER RACERS so hopefully this will hold them off a bit!

Disney bloggers love a photo opp with their main squeeze Mickey Mouse, especially when he’s seen in the first costume from MICKEY AND THE ROADSTER RACERS.

The Coolest CARS 3 Toys You Will Find

The Most Popular Multiplayer Roblox Games